This article is one of a series providing basic information for someone choosing to role-play a Ratfolk, or more properly, a Chittiki Player Character (PC) in a TTRPG based in the World of Cartyrion. The series is designed to encourage preparation of a Player Character by focusing on the nature of the character without focusing on the game statistics.

The Chittiki are one of the most misunderstood races of Folk on Cartyrion. Your people are avoided by many, and even abhorred by some, but they have nevertheless made places for themselves all over the world. Yours is a highly social race, most at home in crowded living situations among large numbers of others - usually other Chittiki but the large cities of other Folk are equally comfortable. You have an innate fascinattion for interesting and shiny things, and you may find yourself fighting the tendency to hoard "things". It is not greed that drives you, though. It is simply fascination and wonder - a desire to see and experience new and interesting places, people, and objects.

Chittiki are smallish humanoids, about four feet tall on average - shorter than most Dwarves, but taller than most goblins, gnomes, and halflings. Most tend to be slender-framed and weigh in at about eighty pounds, though there are quite a number of successful merchant-class Chittiki that are considerably "well-fed", and can weigh in at twice the average. Bodies - except for palms of hands, soles of feet, fingers, and toes - are covered with a very short fur.

Your head shape and facial features are decidedly rodent-like, with a short snout, prominent whiskers, small eyes, and large ears. While those ears can be be rotated in a manner that some animals use to pinpoint sound, your hearing is generally no better than that of the average human - not acute enough to allow you to rely on it for pinpointing sources of sound around you.

Your fur coloration is most likely some shade of brown, with hues ranging from a pale, sandy desert-like color to a deep, rich brown that blends well into dark shadows. Your fur may be a shade of grey instead, especially if you are from one of the more urban cultures. Pure white and pure black Chittiki are also possible, though exceedingly rare. Coloration is most likely uniform over your entire body, though there are rare individuals with mottled dark spots of one or more colors (reminiscent of calico cat markings).

Your eyesight is more acute than that of humans, especially in conditions of poor lighting. While you cannot see in total darkness, your ability to see in dim lighting conditions is enhanced. Depending on your cultural history, you may have a sufficiently developed sense of smell to allow you to rely on it in certain situations. 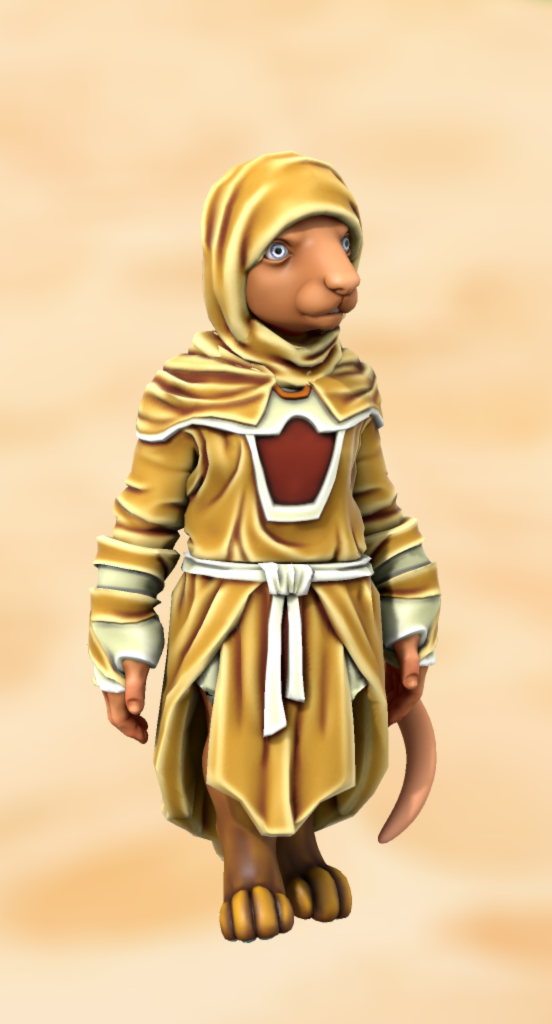 Preferred Race Name
Chittiki, though Ratfolk is an acceptable alternative - even among your own Folk if you are speaking the Common tongue
Native Language
Chittik, or Chittikan. Almost all Chittiki learn to speak, read, and write the Common tongue as well.
Lifespan
40 years
Average Height
4 ft (120cm)
Average Weight
80 lbs (36kg)

Out of necessity, your people are a highly social group; the self-conscious Chittiki is a rare creature indeed. You are accustomed to being surrounded by many others; crowded living conditions are not a problem for you. And while you'll always be most comfortable when surrounded by other Chittiki, you have no trouble settling into crowded conditions surrounded by other Folk as well. You have learned since your youth to be able to ignore the distractions of those around you when you need to focus. You are quite comfortable being part of a team or group. Not only don't you have trouble allowing others to make their contributions and "shine" from time to time, you actually expect this.

Your people were Awakened in the foothills of the mountain range known to most Folk on Cartyrion as the Eastern Basin Wall. This range, and its companion Western Basin Wall, form a bowl which today houses the Great Desert, and at its center is the Dead Lake. But long before the Great Strife, this basin was full of life. The region south of the lake was the forested home to a large Elven enclave, and there was a Dwarven Delve in the mountains nearby. The region to the north was arid: a mix of dry savanna and desert-like climes, but there was life, both flora and faunt, that made this region its home.

Initially, your ancestors made their homes in the natural caves that pitted the sandstone foothills of the mountains. Early on, they discovered that the sandstone contained large deposits of semi-precious stones such as amethysts, various colored quartzes, agates, and jaspers. The granite mountains beyond the foothills bore even more of these commodities. The Elves and Dwarves were willing to trade useful items for the shiny trinkets your ancestors plucked from the hills and mountains, and the Chittiki became a people based on merchant trade.

It was the discovery of diamonds in the nearby granite mountains that fueled the Chittiki expansion around the world. The desire for the diamonds and other stones harvested by Chittiki was great and widespread. Soon, your people even took to the sea - Chittiki sea merchants carried trinkets for trade around the world. Chittiki enclaves sprung up in the large trading ports of the Humans, Dwarves, and even the Awkwana. Today, your people can be found in almost every city and town in the civilized regions of Cartyrion.

You, and the three to five littermates born with you, found yourself in what either already was, or soon would become a rather large family. In fact, it would not be unusual for your mother to give birth to as many as fifteen or twenty such litters in her fertile years - provided the family stays healthy and well-fed. Unfortunately, though, infant mortality is high among Chittiki - almost every litter loses at least one child to "weakness" at birth.

Your first five years were spent living the typical life of a child. Your closest friends were your littermates, but the other brothers and sisters of the house were great companions as well. As you entered your adolescent period, between five and ten years of age, you started to form friendships with the young of other families as well.

Your tenth birthday was important - that was your "Coming of Age Day"... the day you were considered to be an adult. This does not necessarily mean that you left your home; only that you were expected to start fully contributing to whatever household you are a part of. Departure from the home you were raised in is more dependent on space availability than it is on any life milestones. (If your family is well off, with spacious accomodations, you may evern begin to raise your own family within the same domicile!) Females are fertile for about twenty years - from approximately age ten to age thirty. During that time, a female so inclined can have up to two litters per year, with each consisting of between four and six offspring on average - though as mentioned earlier, stillbirths and infant mortality are routine - even in the most advantaged households. To the Chittiki, this is simply the way things are.

Barring accident or illness, you can expect to live approximately forty years, though fifty is not unheard of - and there are some rare examples of elders living into their sixties.