Player Handout 1: Welcome to the Feywood

You have decided to start seeking your fortune in the magical wilderness of the Feywood. But first, you intend to check out a festival that you had heard about even before you left home: the Spudbarrow Strawberry Festival. People travel hundreds of miles to attend this weeklong party thrown by a whole village of halflings, and you want to see if it's as fantastic as its reputation claims. And so you are traveling to Spudbarrow - and you are not alone. The closer you get to your destination, the more people seem to be filling the roads. You are now on the last leg of your journey - the seven-day road from Feybridge Crossing to Spudbarrow. Most nights on the roads between villages are spent in makeshift camps, but tonight you are looking forward to hot food, good ale, and a comfortable bed. There is an Inn just ahead - the Bugbear's Head Inn - that is almost as famous as the festival, and you plan on spending the night there. From the look of traffic on the road, it's going to be a busy place.

These are things that essentially everybody on Cartyrion is at least aware of - even those whose homes are far away and not in the Feywood at all.

The Feywood is one of the seven great forests created by the Elven gods at the beginning of the world. For a very long time, the Feywood was home to a variety of woodland creatures... and many, many Fey (and probably Gremlins)... and Elves... but not much else. Perhaps the occasional Goblin or Gnome, but that's it. There are stories of Taxlatl (Lizardfolk) cities being established here somewhere, but if they ever existed, they're long gone. Tall tales, probably...

It was only maybe a few hundred years before the Great Strife that Human pioneers started working their way into the wood to establish homes and farms and settlements. But when the Strife came, all that was swept away. Much of the northern forest was destroyed and has never recovered. The southern forest - where you are now - was pretty much untouched. That was two thousand years ago. Now, once more, it's only been a maybe a hundred and fifty years or so that Humans from the north are beginning to make their presence felt in the Feywood, but this time they're settling deeper into places where they've never settled before.


About the Great Strife

The Strife, as it's still referred to, started out as a quarrel between some of the gods. But it grew into a full-scale war involving most of the Astralar that have anything to do with Cartyrion. And when the gods go to war, of course their adherents here in the world do as well. The devastation was global in scale. Civilizations fell. Cities and whole swaths of woodland and grassy plains were razed and reduced to dirt and ash. Though the war ended over two thousand years ago, there are many parts of the world that have still not yet recovered.

Shortly after the Creator of Worlds brought Cartyrion into existence, the Astralar began to arrive. One of the first was Berdea. He created the forests, meadows, and flowers - all the green things that grow. He created the furred animals and songbirds to live among his creations, and then he created the Fey to care for his gardens and revel in their beauty. Later, he and Atezana would Awaken the Elves.

The Fey are immortal, but they can be killed. And the word is that they can't make baby Fey. Every Fey that ever will be was created long ago, and as they die to violence, their numbers reduce forever. It is also said that the Gremlins were once Fey themselves, but some of the gods twisted them in form and temperament to suit their own less-than-noble purposes.

The Bugbear's Head Inn and its Environs

The Inn is a two-story structure, with the common room and kitchens on the ground floor, and a number of rooms for travelers on the upper floor. There are a few large rooms, a number of double-occupancy rooms, and four rooms "community rooms", each with four individually rented beds (the cheapest accomodation possible). 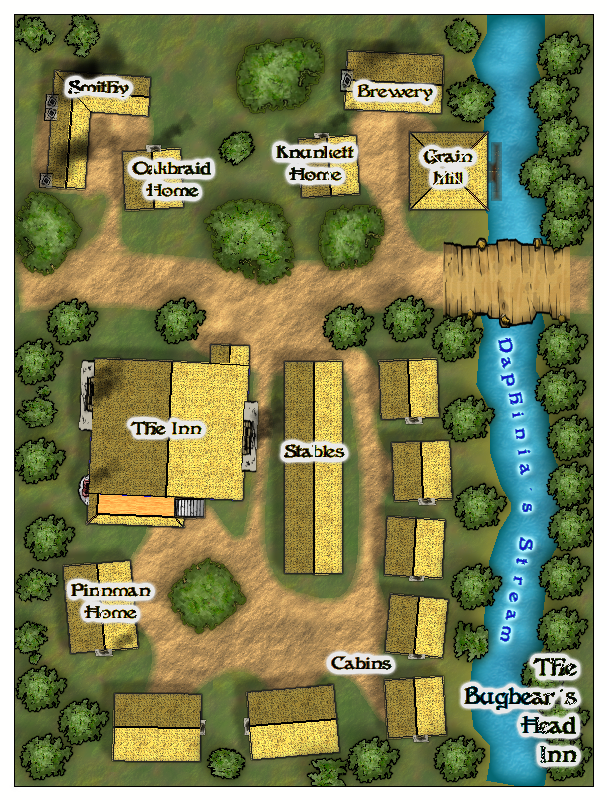 The Stables have capacity for at least 12 horses (or other similar mounts), though up to 18 could be accomodated short term if necessary. There is also room to bring two wagons in out of the weather.

The Pinnman Home is the residence of Theodric and Branwyne Pinnman - the owners of the inn. Their four children: Ellabeth (server/entertainer), Ranulf (stable boy), Joline (child), and the youngest, Bartlebert also live there.

The Cabins are available for rent. Usually, they are rented by small groups (adventurers, for example) who wish to use the Inn as a base of operations for a time - long term rentals are available. They may also be used if all of the upper-floor regular rooms at the inn are booked. This happens once or twice a year (and this game session happens to be one of those times!) The three cabins to the south are large, have three rooms each, and can accomodate a party of six comfortably. The smaller cabins along the river are one-room, and can accomodate four comfortably.

The Oakbraid Home is the residence of the Dwarf Tugreth Oakbraid, his wife, and son. They run the smithy/forge that is adacent to the house and offer services to travelers.

The Knunkett Home is the residence of the two Gnomes that run the grain mill, and the brewery/distillery that supplies the Inn.

Not shown on the map, there are a few small vegetable and herb garden patches behind (south of) the large cabins. The home of the Halflings Agilbert (the gardener) and Clotilde Oldbuck (the cook) can be found there as well.

The Inn is a two-floor building. The entrance from the road is in the northeast (upper right) corner; a small vestibule has pegs on the walls for wet cloaks, heavy outer jackets, backpacks, and the like. 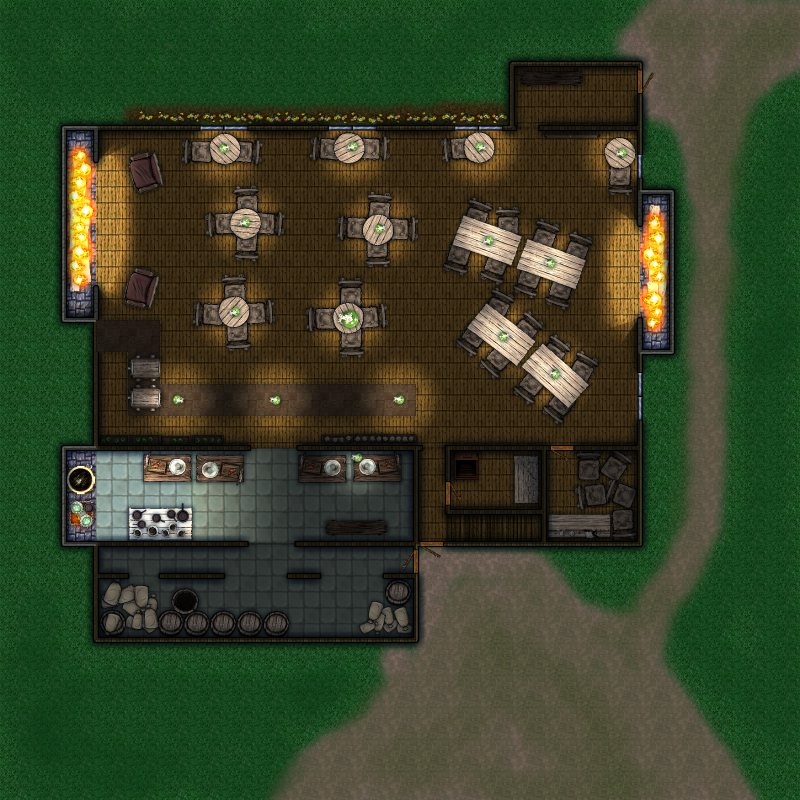 by DinosaurBob (DungeonFog)
The common room itself takes up the bulk of the ground floor. Two hearths are usually burning brightly on the east and west walls. Above the hearth on the west (left) wall, a mounted trophy head of a large bugbear is displayed. The inn's owner, Theodric Pinnman rescued Daphinia the Naiad (who lives in the nearby stream) from this very bugbear over 20 years ago. You will find Theodric behind the bar in the common room.

Two comfortable, stuffed leather easy chairs face the west hearth, but are often removed to make room for entertainers (musicians, typically) to perform on busy nights. You are told that on most nights, the Innkeeper's daughter, Ellabeth, provides this entertainment.

The kitchen is run by Clotilde Oldbuck, a Halfling woman. Night and day, the kitchen is the source of tempting aromas of fresh-baked bread, herb seasoned soups and stews, and perfectly roasted joints of meat.

At the extreme south, there is a kitchen storage area. Off the common room in the southeast corner are small storerooms for extra tables, chairs, tankards, and the like. Additional small tables and chairs can be brought out from these storage rooms in a pinch (and probably have for the evening when you arrive at the Inn.

A stairway near the back (south) exit of the Inn leads to the rentable rooms upstairs. A Small Cabin at the Inn

The cabins that run alongside Daphinia's Stream are designed to accomodate four persons, and are usually rented for periods of weeks to (occasionally) months by groups such as adventurers that plan on coming and going frequently. Typically, they are quieter and more private than the rooms on the Inn's upper floor as well.

The small cabins are single room affairs with four beds, four nightstands, and a central round table with four chairs. At the foot or side of each bed, there is a lockable chest as well where guests can store property securely. The keys to the four chests are provided when a cabin is rented. In a pinch, a fifth or even sixth bed can be moved into a cabin, but groups this large are usually better off in a larger cabin (if one is available).

As a nod to comfort for cold feet in the mornings, there is a small throw rug placed beside each bed as well. The fireplace provides warmth during colder periods of weather as well.

Inn from the Bridge Banner by DinosaurBob and Flowscape on Steam.

Welcome to the Feywood - A One-Shot Adventure 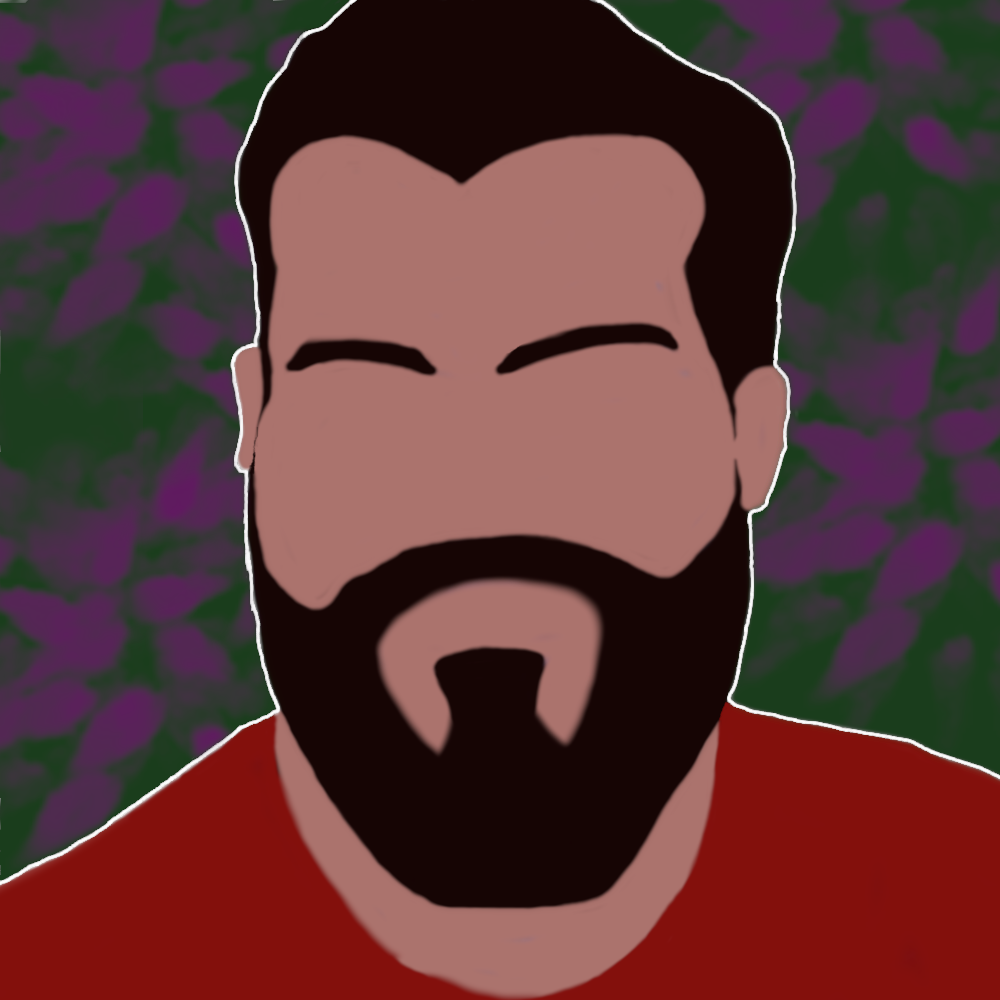 Love the visuals! What program do you use? :o

I'd love to see your own opinions on my main world, Xardia, and it's Free D&D 5e Module!

The two floor-plan maps are made with DungeonFog. The "outdoor" map - the first one - is made with Inkarnate.

Thank you! May have to tell DungeonFog to thank you for sending them a customer!

I'd love to see your own opinions on my main world, Xardia, and it's Free D&D 5e Module!
Powered by World Anvil