The Hidden of Baron's Point

But this picture of the city does not tell the full story of Baron's Point and its people. Because there is another Baron's Point... a city underground in sewers, tunnels and chambers hewn out of the bedrock upon which the city is built. This city is populated as well, and while that population consists of representatives of the same ancestries as can be found in the city above, the City Below has developed its own unique culture. These are the Hidden, and this is their story.
Parent ethnicities
Related Locations

One would expect the lifestyle of those living in the sewers beneath a city to be one of squalor and destitution, and for a few of those among the Hidden in Baron's Point, one would be correct. But these are by far the minority. For most who chose to live beneath the city, daily life is pretty similar to that of the commonfolk above. Some families live in homes that consist of one large chamber with areas set apart for sleeping, gathering, or performing "home crafts". Some families have separate smaller chambers carved off the main one for sleeping and some privacy for a few of the individuals living there. In any event, these chambers will be furnished with bedding, tables and chairs. Some have walls paneled with wood or even wooden floors. Many have rugs covering floors, and tapestries covering walls. Stout wooden doors are the norm.

One difference is that individual homes do not have hearths or cookfires - it is impossible for each home to have its own chimney. Instead, there are a number of "community kitchens" with chimney towers that have been designed to be unobtrusive to those in the city above. in these kitchens, which can each serve as many as forty or fifty families, meals are prepared and eaten in a communal setting. Several families will typically get together to prepare common meals which are then served at long tables.

Most of the folk that live the life of the Hidden are honest and decent - just trying to make a living like any of their counterparts in the city above. Many "commute" to the overworld to work each day - many of the dockhands, stevedores, and teamsters that move goods on and off the ships in port and around the city in wagons live in the undercity. But everyone living beneath Baron's Point knows that some among them are not so honorable. There are many thieves among ones neighbors in the undercity. As a result, it is quite rare for anyone or any family to make any sort of public show of wealth. Valuable family heirlooms are carefully hidden and not put on display in a cupboard. Even the best off are careful not be too ostentatious with their furnishings lest they mark themselves as a looting target. 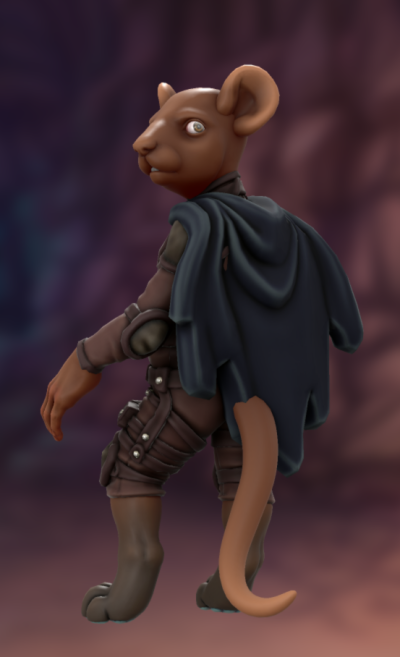 A Hidden Traveling the Tunnels
The knowledge that there are many dishonorable folk among the undercity dwellers has another consequence. The Folk of the tunnels and warrens beneath Baron's Point learn very quickly to move about in an unobtrusive, if not downright stealthy manner. Children learn at a very young age how to place each foot carefully when walking - both to avoid slipping on something slimy or slippery, and to not bring attention by splashing into a puddle. Newcomer adults learn these skills quickly as well, though many require a personal robbery experience to drive home the lessons. 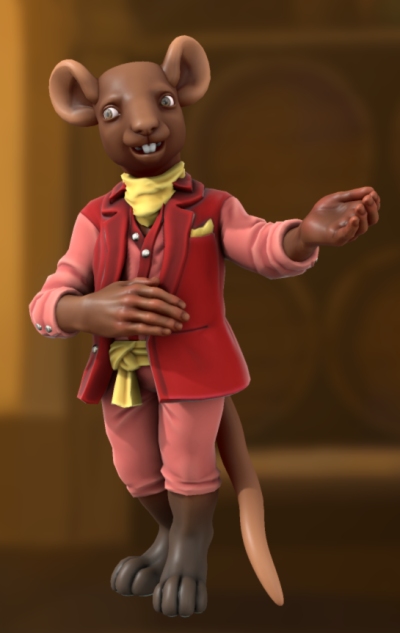 A Hidden Relaxing at Home
The need for stealth extends to the choices of clothing and, for some, armor, as well. Dark clothing and cloaks that help one disappear into the shadows and blend in against the dark tunnel walls are almost universal. Jewelry that cannot be covered is almost never worn, as the glint of gold is like a beacon to those who make their living by preying on others. Folk that choose to go about with some sort of armor for protection almost always eschew metallic armor because of the noise it generates - leather or studded leather is preferred. But the fact that outer clothing is designed to be drab and unnoticeable has also given rise to the custom of wearing bright, bold colors when one is safe within a home dwelling. In fact, the wearing of brightly colored, and sometimes rather expensive clothing of dyed linens and even silks and satins has become one of the few ways that the Hidden display their wealth. Jewelry may worn for display in the home, but rarely is it too ostentatious due to the reluctance of folk to paint targets on themselves by flaunting too much wealth.

Attitudes Toward the City Above

The attitudes of any inividual among the Hidden toward the city above can usually be put into one of two categories: indifference or resentment. For most, the tunnels and warrens of the undercity are just a part of the city - the part they call home. These folk believe they serve a purpose beneath the city, and are satisfied with a private smugness at knowing if they did not do their jobs in the tunnels, the people above would suffer. But they do not begrudge the people above their lifestyles. They are happy with what they have.

For some, though, the fact that the Folk of the city above take the Hidden for granted - when they think of them at all - is maddening. They resent the fact that the folk above have prettier houses... can see the sun and stars and moons... can smell a fresh breeze. They chafe at the fact that a family in the world above can have a private family dinner, or sit beside their own fireplace on a winter's evening.

For many, the biggest aspiration in life is to be able to afford to come up out of the undercity and establish a home in the world above. But not all have this dream. A few are content to live in the tunnels and chambers beneath the city and have no desire to change their situations. And there are always a few that wish to escape not just the tunnels, but the city of Baron's Point itself. These often find the lifestyle of an adventurer to be attractive.

Banner Image by RayMark from Pixabay

Answering: "an ethnicity surviving in an inhospitable region"
Visit RPGDinosaurBob's Competition Page Check all other answers to this prompt Competition Homepage