The Free City of Endmere

Endmere is the largest of the Free Cities. It is also the most enigmatic. Because of the lingering effects of the Wasting, surrounding agriculture barely meets the city's needs. The only resource the city produces is salted fish - not an attractive commodity. And yet the city prospers. It does so because it has a chokehold on trade, controlling the exit of the Icefell Bay and the Trade Road to the Glitterhold. The ruthlessness of the Four Families in dealing with threats to their business enterprises contributes as well.
— Fredegar Longfoot's Atlas of Cartyrion

Endmere is one of the great Free Cities which, since the Great Strife, are independent of the Kingdoms of Mankind. Like its sister cities of Icefell and Seaguard , Endmere used to be a major city of the First Kingdom - in fact it was the gateway to the kingdom on the trade road along the Farsea coast. The devastation of the Strife saw the city reduced to ruins and abandoned by the kingdom whose borders receded thousands of miles before the tide was turned and the Armies of Light won the day.

After the Strife ended, the few survivors of Endmere and the surrounding lands gathered together and rebuilt. Jaded by what they perceived as the abandonment of the First Kingdom when their city fell, they vowed that they would never again bend the knee to any crown. Led by the Four Founders, they rebuilt Endmere into a city which is now one of the most powerful on the Farsea or Icefell Bay coasts.

At the last count, over one hundred twenty thousand people, representing of all the civilized races of Cartyrion, claim to make their homes in the city.

The City of Endmere was first founded over four thousand years ago - about eighteen hundred years before the Great Strife. When founded, it was the seat of power for the duke that oversaw the eastern marches of the old First Kingdom. During the Great Strife, its population was decimated and much of its splendor destroyed. The duke and the armies of the First Kingdom abandoned the city after a prolonged siege by the forces of the Dark Gods , leaving the population to fend for itself. Shortly after, the city was invaded, sacked, and burned.

The Rebirth of the City

After the fall of Endmere, though, the tides of war turned in favor of the Armies of Light. The Great Strife ended with the Dark Armies defeated and the gods deemed most responsible Imprisoned. Endmere at this time was little more than a blasted rubble - mere hundreds remained where once there were tens of thousands.

Endmere's Harbor
Four leaders stepped forth to organize the few survivors and the rebuilding of the city began. They were shrewd, focusing first on restoring the seaport, building or rebuilding ships, and securing control of the sea trade through Icefell Bay. They knew this business well - two were ship captains - one of the Cliffport Seafarer heritage, two were merchant traders.

As time passed, the sons and daughters of these leaders carried on as their elders died off, and by the time Endmere was restored to a size that required an actual government, the Four Families had already become that. The people did not complain when this arrangement was formalized by the establishment of the Ruling Council, ostensibly made up of the hereditary heads of the Four Families.

In the years since the Strife, the city has not only been completely rebuilt, it is more splendorous than ever. The chokehold on trade results in great wealth being amassed within the city, despite the fact that very little is actually produced here. It is a city built on trade.

The one commodity that Endmere may be said to produce is knowledge. The Four Families like to display their wealth and power by building grand structures, and grand structures attract intellectuals. The Hall of Trade - essentially the palace of Endmere - is the grandest building in all the city, built by Dwarven masters of the finest materials. There are four great basilicas gracing Temple Hill dedicated to the Alevar, Duagnar, Humanar, and even Goblinar who were among the The Gods of Light. Across the river, the The University of Arcane Arts attracts students who can afford to attend from all over Cartyrion. The Grand Bazaar market region surrounds the Arena, which is the largest gladiatorial combat site on Cartyrion.

Only a few of the ruins of the original city remain; these are preserved to remind the citizenry what happens when they depend on people not of the city to keep them safe.
Founding Date
New Year's Day, 78CR
Type
Large city
Population
376,000
Inhabitant Demonym
Endmeran
Location under
The Coastal Frontier Lands
Included Locations

The ruling council is composed of the heads of the Four Families that trace ancestry to the Four Founders.

Endmere is a major trading hub which controls the southern coast of the channel separating Icefell Bay from the Farsea. It does extensive trade with the coastal towns, but also with the other Free Cities of Seagate to the northwest, Seaguard across the channel to the north, and Cliffport - home of the Great Fleet of the Seafarer Dwarves - to the east.

Endmere sits along the Great Trade Road that ultimately links with Cliffport and the Dwarven Glitterhold to the East, and the First Kingdom to the West. The city also maintains a large seaport with a number of permanent docks and warehouse facilities to support trade. It is a walled city, but the gates of Endmere have not been closed since they were reconstructed after the Great Strife. 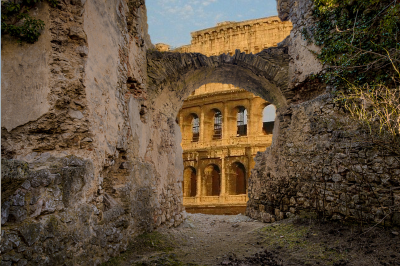 Ruins with the Arena Beyond

Every kind of good imaginable passes through the city - whether in legitimate or black market trade. It is said that one can purchase anything in Endmere if one is willing to spend enough to time and courage looking and enough gold buying.
— Fredegar Longfoot's Atlas of Cartyrion

Articles under The Free City of Endmere

The Four Families of Endmere

The Four Founders of Endmere

The University of Arcane Arts

Answering: "Write about the history of a settlement that was almost entirely wiped out and was then rebuilt."
Visit RPGDinosaurBob's Competition Page Check all other answers to this prompt Competition Homepage